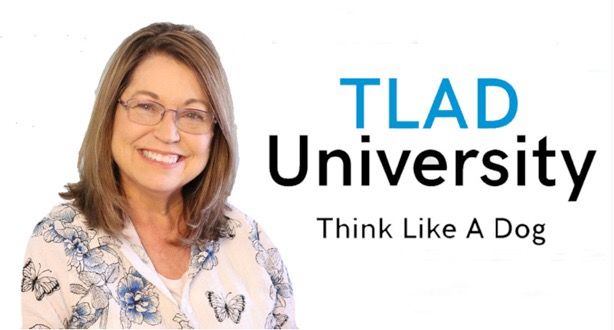 Welcome
I'm Glad You Found  Us!

Mar 12 / Penny DiLoreto, CPDT-KA
Please humor me for a moment, and I think you will get my point.

Let's go on a visual journey together.  Let's pretend you had one of those Murphy's Law kind of days.  You know, if it can go wrong, it will.  Pretend with me that your boss came to work grumpy and took it out on you. Someone posted a hateful comment on your Facebook paged, and some inconsiderate so and so cut you off in traffic, causing you to miss the green light, and now you're going to be late picking up the kids.  You know what I'm talking about - one of those days that you wish you could have stayed in bed.

Now let's pretend that you make one last stop at the grocery store to pick up a few things before heading home, and it happens!  Some jerk pulls in front of you and takes the only parking spot left.

At that moment, something inside of you snaps.  You bang your fists on the steering wheel, rip off your sunglasses, step out of your car, and give that jerk a piece of your mind.  All the while, your poor kids sit in the backseat of the vehicle, horrified, wondering if mom has gone crazy.

Mom's not crazy; she's Trigger Stacked.  One adverse event during her day got stacked on top of the previous unfavorable event causing extreme stress.  Think of it like the Straw That Broke The Camels Back kind of moment.  On any other typical day, she might have been annoyed with the diver that took what she considered to be her parking spot, but she wouldn't have flown into the rage she demonstrated today - especially in front of her kids.

Trigger stacking can happen to dogs, just like with humans.  When a reactive dog is Trigger Stacked he/she may lash out at others just like the mother did in our above story.  Trigger Stacking can cause reactive dogs to pick a fight with another dog that is unlucky enough to be close by, even if that dog is their best friend or even their human family member.

Several events can cause Trigger stacking in dogs.    One example is two reactive dogs behind a fence barking as people pass by.  Soon a fight breaks out between the two dogs.   When dogs are stressed, the body releases the cortisol hormone, which can cause the behavior commonly called flight-or-fight.  When stress becomes a chronic problem, cortisol also causes issues, such as a weak immune system and other behavior issues.  Somewhat like  PDST in military personal.

It is essential to understand that just like you, your dog will encounter triggers during the day.  The greater the number of triggers and the more negative the triggers are, for your dog, the more likely your dog's behavior of fighting will continue.

Be The First To Get Free Updated Training Advice and Blog Posts.

Adding a new pet to your family is always an exciting time; it can also be stressful for your other pets. This article includes steps for introducing the latest addition to your existing pets.
Snake Avoidance Training
Mar 15, 2021

Tom Derr and his lovely wife, Brahna, joined me for coffee and allowed m to pick Tom's brain on the topic of snakes. Tom has over 20 years of experience working with and handling rattlesnakes and snakes of all breeds. Tom's business, Tom's Snakes and Rattlesnake Rescue, located in the Mira Mesa area of San Diego, California.
Behavior Problems
Mar 12, 2021

Trigger Stacking can cause reactive dogs to pick a fight with another dog that is unlucky enough to be close by, even if that dog is their best friend or even their human family member.
General Obedience Training
Mar 11, 2021

Help! My Dog Has a Split Personality

It just doesn't make sense to most dog lovers that have reactive dogs in their family when their naturally loving dog will suddenly bite them or other dogs living in the same household.
Snake Avoidance Training
Mar 8, 2021

Are you curious? Possibly you have never heard the term “Force Free” in connection with dog training and wonder how a snake avoidance program could be successful without the use of live snakes, shock collars, and force. Are you a skilled dog trainer? Maybe you are contemplating the idea of starting a Snake Avoidance program, and want to explore the concepts of Force Free Training. Are you a loving pet owner, one that wants to keep your pet safe from snake bites, searching for a program you can teach your dog at home? If you answered yes to any of the above, then I encourage you to keep reading.

We are an online educational platform that helps dog lovers like you develop a stronger bond with their K9 buddy.

Check Out All Our Courses Here